Why Hire a Private Investigator in a Criminal Defence Case?

Previous Next
Why Hire a Private Investigator in a Criminal Defence Case? 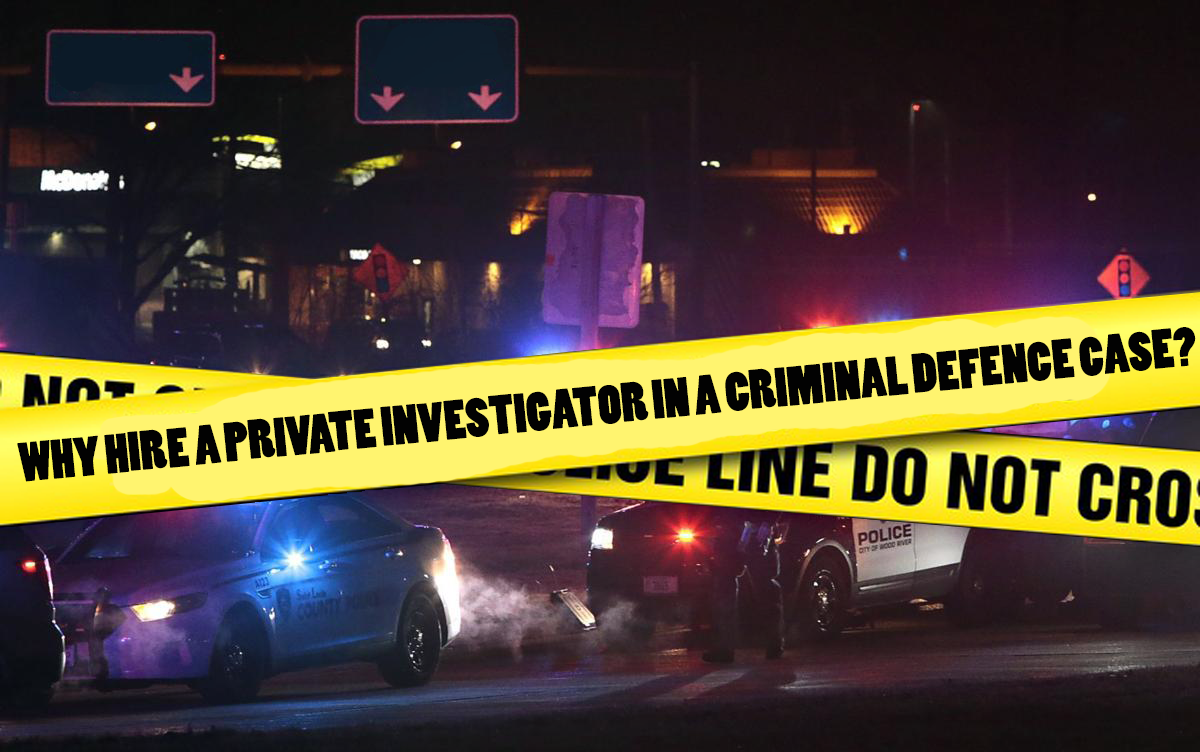 Despite our comparatively advanced, lenient, and transparent criminal justice system, things don’t always happen exactly as prescribed by the law. The prosecution uses police officers and investigators employed by the crown. Which in itself, is not a bad thing, and that is how things are and probably should be, until we develop a better system.

But, at times, heavy work load, compiled stress, honest mistakes, departmental complications, and unfortunately, even self interest, such as desire of promotion, or feelings of righteousness and revenge, can put defendant at risk of receiving a harsher sentence, and make a difference between years of jail time and/or being acquitted entirely.

What’s the role of a private investigator in a criminal case?

Private investigators are independent professionals, on the other hand, and are not attached to a yearly salary, unions and guaranteed pensions plans. But most importantly, private investigators, are not burdened by uncontrollable heavy workload and departmental bureaucracy. They often work one case at a time, and have extensive resources in their possession, that do not require signatures and permissions to act from their superiors. The only way they earn their bread, is by maintaining impartiality and objectivity, while working hard to prove their client’s case. Private investigator’s primary job in the criminal defence case, is to verify the collected evidence by the prosecution team, and to build on it even further, though keeping defendant’s side of the story in mind.

Although defence attorneys and their paralegal teams often uncover mistakes and prejudices on their own, and can do many of the tasks mentioned below themselves, professional investigators offer more time and more appropriate expertise. Majority of criminal defence investigators are former members of law enforcement agencies, and therefore, have legal training and extensive experience investigating, interrogating, and doing the leg work collecting evidence and establishing rapport with witnesses.

It isn’t uncommon, that correct procedures were not followed, arrests were made on unsupported grounds, rights of the accused were violated, some evidence was unnoticed, misinterpreted, and/or disregarded by the prosecution. Some evidence while reported as facts, upon closer examination, turns out to be not, but was just a point of view, a hypothesis, or worse, planted. Private investigators know legal procedures and have the ability to view evidence from a different angle, have more time on their hands, and often have access to alternate resources and may receive them sooner than law enforcement agencies. It also isn’t uncommon, for witnesses to be reluctant to provide statements to the police and sometimes alter their previous account of events. In this sense too, private investigators can be less intimidating and may have better results, because they do not carry a gun and do not wear uniforms. Many other psychological factors play a role when interviewing witnesses and collecting evidence, and good private investigators excel at it, since they have experienced both the government and the private industry.

Can private investigators help in court?

Just the same, private investigators can be called to court to testify on the professionally recorded and signed evidence, even if the witness is no longer available or becomes unfavourable to the prosecution. Examples of such evidence may include: re-examined crime scene, photographs and video of the crime scene or of another location pertinent to the case, street camera or publicly recorded footage, located, interviewed and recorded witnesses and their statements.

Private investigators will assist in cases of robbery, arson, kidnapping, murder, fraud, racketeering, sexual assault, human rights violation, domestic disputes, child abuse, terrorist activities, intellectual property, and many others. Good private investigators will make the defendant’s case a priority. They will devote full time and energy, and will effectively and discretely, maximise the chances for best possible defence. Potentially, more evidence will be collected at the crime scene, or through public records and open sources; more witnesses will be located and interviewed, who no one may have even known existed, and thus disclosing more detailed information; better reports will be written; and all of the above, will support the client’s version of events in court, and will tip the scale of justice toward a more objective and fair sentencing, beyond any reasonable doubt.